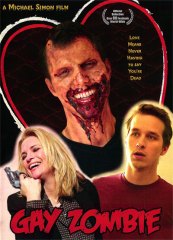 There’s really only one thing wrong with Gay Zombie…it leaves you hungry for more. Running only 20 minutes, this gay horror short is funny, light-hearted, gross, campy, romantic, tragic, sexy, and even throws in a fashion show montage! It’s rare that I like horror films that follow the story of a zombie instead of making the undead the monsters, but there are a few horror comedy exceptions, and this is one of them.

The simple story of a zombie who is struggling with the fact that he’s gay, Gay Zombie is perfectly cast with cuties who can act and manage to portray likeable characters in such a short time. And the actor playing the zombie makes even the undead look good in a yellow speedo! The reactions when Gay Zombie hits the bar scene are fricking perfect. The makeup is awesome and the film even takes a dark—and gory—turn. 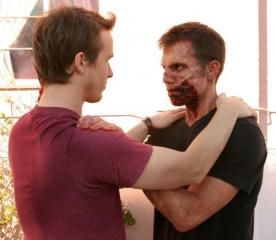 On top of all that, the punk rock theme song “Gay Zombie” totally rules!!! I wish I could get it on CD.

I am the author of the horror anthologies CLOSET MONSTERS: ZOMBIED OUT AND TALES OF GOTHROTICA and HORNY DEVILS, and the horror novels COMBUSTION and NO PLACE FOR LITTLE ONES. I am also the founder of BOYS, BEARS & SCARES, a facebook page for gay male horror fans! Check it out and like it at www.facebook.com/BoysBearsandScares.
View all posts by Daniel →
This entry was posted in Everyday I Read the Book: Literary Thoughts, Johnny You ARE Queer - Gay Thoughts, Movie Times & Television Schedules - Staying Entertained, Scared Silly - Horror Comedy, The Evil of the Thriller - Everything Horror and tagged gay horror, Gay Zombie, horror comedy, living dead, undead, Zombies. Bookmark the permalink.