Camp Slaughter: this is how you capture the spirit of 80s slashers 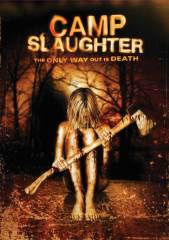 I really cannot BELIEVE that I’ve seen this 2005 movie TRASHED by those who claim it completely fails in doing justice to the 80s slasher tradition. These people either didn’t grow up on 80s slashers, or don’t remember the 80s. The entire look and feel of Camp Slaughter (aka: Camp Daze) is like a cross between the original Friday the 13th and Sleepaway Camp.

Director Alex Pucci makes films for the man-centric Scream Kings production company and is responsible for Frat House Massacre, which I just blogged about the other day. I’m quickly becoming a fan of his work. Pucci sure knows how to imitate classic horror in a modern context. From the musical score to the fashions, the goofy dialogue to the kills, the grain of the film to the killer POV, this is dead-on Mrs. Voorhees territory. Even the campground and cabins look like a genuine Friday the 13th shooting location. Wow.

Pucci is not afraid to celebrate the male body, and in this film the tight 80s shorts remind me of WHY the 80s were such a great time to be a young gay boy. DAMN. And he casts some guys with some fine asses and legs. Interestingly, one of the main characters, played by horror cutie Matt Dallas, is blatantly gay, but for some reason Pucci lets it just float out there instead of making it a concrete fact. Matt’s friend mentions him checking out guys as an aside, but his other friends seem oblivious to the fact—or just don’t care because it doesn’t matter. And that becomes an interesting contrast in the plot of Camp Slaughter.

See, in Camp Slaughter, four friends—the gay dude, his cute buddy, a white chick, and a black chick—are on a road trip when they suddenly find themselves in 1981. Literally. Their vehicle pretty much breaks down in the middle of the movie Sleepaway Camp. AMAZING. While the interactions between the modern group and the kids from 1981 is clever, I don’t think it’s attempting to be as funny as some who blast the movie claim it fails in being. The 80s references (including nicely done faux 80s filler music that sounds like all the generic movie music used in 80s films that couldn’t afford to pay for a Kajagoogoo or Naked Eyes song) offer an occasional chuckle, but more importantly, they establish that things just aren’t right. Short of the short shorts on the men, my favorite 80s spotting is the mini-Pac Man arcade machine someone is using (I had one of those in junior high!).

Since the formula of the film is straight-up Friday the 13th, it gets to be a little much when the black chick constantly points out that this is some Jason shit going on. But at the same time, she’s awesome in her conviction about it, and there are times when her reactions are quite funny and realistic. Any of us who grew up on this crap would be saying the same exact shit.

The four characters getting stuck in a 1981 slasher situation is just the beginning of this unique approach to making a retro slasher. Camp Slaughter is actually reminiscent of the 2003 film The Locals that I blogged about ages ago, but I can say now, I like Camp Slaughter better. Actually, I frickin’ love Camp Slaughter.

The plot gets deviously wacky in the last half-hour, but it manages to make sense—although some of the editing makes it hard to follow the movements of the characters. What’s great about the ending is that we are bombarded by one unexpected turn after another. There’s nothing in the way of predictability here. I personally think this was a brilliant way to do justice to old skool slashers in the modern day. I know new audiences might not like the dated techniques used, but they are EXACTLY what I lived on in the 80s. I feel right at home at Camp Slaughter. It made me want to do this vlog:

I am the author of the horror anthologies CLOSET MONSTERS: ZOMBIED OUT AND TALES OF GOTHROTICA and HORNY DEVILS, and the horror novels COMBUSTION and NO PLACE FOR LITTLE ONES. I am also the founder of BOYS, BEARS & SCARES, a facebook page for gay male horror fans! Check it out and like it at www.facebook.com/BoysBearsandScares.
View all posts by Daniel →
This entry was posted in Johnny You ARE Queer - Gay Thoughts, Living in the 80s - forever, Movie Times & Television Schedules - Staying Entertained, The Evil of the Thriller - Everything Horror and tagged 1980s, 80s, Camp Daze, Camp Slaughter, gay horror, slashers. Bookmark the permalink.

3 Responses to Camp Slaughter: this is how you capture the spirit of 80s slashers