What would Gremlins look like if they came from hell?

Gremlins created a monster—and I don’t mean when they ate after midnight. I’m talking about Troll, Critters, the classic 80s film Munchies starring Harvey Korman, and Ghoulies. How this particular film spawned 3 sequels is beyond me.

Take Gremlins and throw in a splash of satanic worship, and you’ve got this mess of a movie. On the bright side, the 80s fashions rock. The generic new wave songs at a party rock. Michael Des Barres rocks. Who’s Michael Des Barres you ask? He’s the guy who recorded the original version of “Obession” two years before Animotion made it a hit, in a duet version with Holly Knight that can be found on the soundtrack to the classic 80s movie A Night in Heaven starring Christopher Atkins. Who’s Holly Knight you ask? What movie is A Night in Heaven you ask? Who’s Christopher Atkins you ask? Then turn in your 80s membership card immediately.

Years later, a guy moves into a house he inherits, begins practicing the black arts, and summons the Ghoulies, plus two little people in Renaissance fair regalia, a zombie version of Michael Des Barres, and some sort of ventriloquist dummy, who all then proceed to kill his friends. So glad this movie is only an hour and twenty minutes. All it really has going for it is the awesome hand puppets covered in slime and a spotting of what I’m pretty sure is the Pink Ladies car near the end of the movie. And of course, it came from the 80s.

I have to confess. I like Ghoulies II better than the original. It borders more on Gremlins cheese and camp, has a feel much more like one of the Puppet Master movies, offers even more of an 80s vibe, and focuses solely on the Ghoulies as the troublemakers instead of all that devil worship mumbo jumbo.

This time around, the Ghoulies sneak into a haunted house attraction at a carnival to kill off anyone who passes through it. But a little person who works at the carnival catches on to the truth. This little man you’ll recognize immediately. He is Phil Fondacaro, a horror and sci-fi movie GOD. He has appeared in Something Wicked This Way Comes, Hard Rock Zombies, Phantasm II, Willow, Tales from the Crypt: Bordello of Blood, Blood Dolls, The Creeps, Land of the Dead. He was an Ewok. He was fricking TROLL.

Also of note is the jerky boyfriend from Halloween 4, an old man who was also in Something Wicked This Way Comes as well as House II and Killer Klowns from Outer Space, a chick from Pumpkinhead, a guy from Night of the Demons, and a couple of kids who appeared in episodes of none other than The Golden Girls. Awesome.

The giant rubber Ghoulie costume at the end rox, as does the final closing song, called “Scream Until You Like It” by heavy metal band W.A.S.P. You can get this studio track on their otherwise live 1987 CD “Live…and Raw.”

You can’t make up a subtitle like that. Clearly, the Ghoulies are snobby liberals because they want an education. This sequel doesn’t even try to be horror or have a worthwhile storyline.

The Ghoulies return from hell through a toilet bowl when a teacher reads from a horror comic book. No joke. It’s the same Ghoulies, but the puppets have been redesigned. Oh—they also talk now. Like constantly. Nonstop one-liners and a whole slapstick Three Stooges routine.

On top of their shenanigans, it’s “prank week” at the college. These college students act more immature than high school students, which means lots of booze, bodacious boobs, girls in thongs, and shower scenes featuring bush (it was just before the baby va-jay-jay era took over).

A few highlights in this film. Let’s start with the usual: The Golden Girls connection. Kevin McCarthy, a veteran actor who you will recognize immediately, did indeed appear on the show. He also happens to have a history with horror films, starting way back with the original Invasion of the Body Snatchers…and the 1978 remake. Plus, he was in the werewolf classic The Howling.

Next, we have the adorable chubby guy from the awesome horror film Dolls. He was also on an episode of The Golden Girls. He’s also just as cute in this film even if his role as a cop is cartoonishly ridiculous. I love him.

Finally, we have the ultimate reason that Ghoulies III: Ghoulies Go To College is a masterpiece. You will immediately recognize the curly-haired redhead–it’s Marcia Wallace from the original Bob Newhart Show! Well, later in the film, as the Ghoulies are doing her in, one of them says, “Is she famous?” Another replies, “Yeah. She was on Newhart.” MASTERPIECE.

A 1990s sequel to an already bad 80s franchise. The fourth film in the series. And it bears repeating. Made in the 90s. Need I say more?

This mess is awesome. First of all, it proved to me (as if there was a doubt) that I drool over older men and have no use for younger guys. The fricking dude who roused the Ghoulies in the first movie is BACK. And he’s now matured, weathered, rugged, buff, and with facial hair. YUMMY. I actually thought he was trying too hard to be hot in the first film.

So hot daddy is a cop. There’s this S&M chick in leather with delicious milk bags who is working for the demon world. There are pentagrams. Two things that are supposedly Ghoulies are summoned. They are not little critters this time, they are two full-sized little people in really bad costumes. They kind of look like Gamorrean Guards from Return of the Jedi. They talk like homeboys. They drop one-liners left and right.

This is the way you end a franchise. This one gets classic status for pretty much all the above, as well as the flashback clips to the original film so we can get a before and much-better-after of the hunky lead. 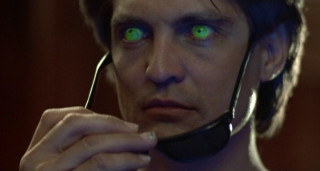 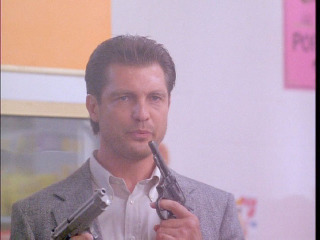 And really, the topper is the fact that there’s a scene featuring a female driver with red hair whose car goes out of control. I can’t explain how this worked, but it’s the same exact footage used for a scene in 976-Evil II. The films must have been made simultaneously and worked with a lot of the same production, because if you look at the credits on imdb, Philip McKeon, who plays a cop in 976-Evil II, is credited as having a very small role as a demon in this film. WTF?

I am the author of the horror anthologies CLOSET MONSTERS: ZOMBIED OUT AND TALES OF GOTHROTICA and HORNY DEVILS, and the horror novels COMBUSTION and NO PLACE FOR LITTLE ONES. I am also the founder of BOYS, BEARS & SCARES, a facebook page for gay male horror fans! Check it out and like it at www.facebook.com/BoysBearsandScares.
View all posts by Daniel →
This entry was posted in Living in the 80s - forever, Movie Times & Television Schedules - Staying Entertained, Sound Check - The Songs Stuck in My Head, The Evil of the Thriller - Everything Horror and tagged 1980s, 80s, Ghoulies, Ghoulies 2, Ghoulies 3, Ghoulies 4, Ghoulies II, Ghoulies III: Ghoulies Go To College, Ghoulies IV. Bookmark the permalink.

5 Responses to What would Gremlins look like if they came from hell?