Covering all male bases, I take on the gay horror-comedy Killer Condom and the straight horror film Teeth. Which means no man will get out with his penis intact!!! 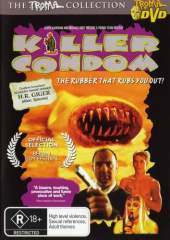 Based on the comic by Ralf Konig, Killer Condom is a German film that takes place in New York City! Yet, it’s about a gay Italian bear of a detective who wishes he was back in Sicily (eating cheesecake with Sophia Petrillo, probably). Just like classic cult films of the 1970s, it paints a picture of the city as an immoral playground…at first. But the real bashing is pretty much aimed at conservatives and the fanatically religious.

I love this movie. Made in 1996, it treats the lead detective’s gayness as if it doesn’t matter. And there’s something so sexy about him, even if he is frumpy, dumpy, and balding. He investigates a series of penis attacks at a sleazy hotel where prostitutes take their johns. Of course, we know the cock chomping culprit is a condom with teeth, and our detective soon finds out the same after hooking up with a hot young male prostitute.

As the detective investigates the man-eating condom, he is pursued by an ex-cop turned drag queen who is in love with him. He also struggles with his feelings for the young male prostitute. Their relationship actually reminds me of the relationship between my paranormal investigator Deck Waxer and go-go dancer Maru in my horror novel Combustion!!!

Killer Condom is funny, campy, wacky, gory, and sexy (we get to see both the bear and the boy asses). Sequences of the detective chasing and shooting at the condom are fricking funny, as is the prank he plays on his straight detective partner, who is forced to go undercover in the gay community. And in the end, despite all the sci-fi madness going on, we’re left with such a gay-positive message. Hell, the detective even has a monologue that Paula Deen may have plagiarized for her recent plea for forgiveness….

Teeth definitely delivers what it promises—a cock-noshing va-jay-jay. This young woman who is heading a chapter of “The Promise” abstinence group in her school soon finds herself giving into temptation. But her love box is not ready for that, so it begins flashing those pearly whites (ew, on so many levels).

Knowing the premise of the movie, you absolutely cringe the first time a dude slips inside her. And with good reason. Teeth leaves nothing to the imagination. It boldly shows wiener-less crotches gushing blood and dead penises lying off to the side. Thankfully, the film turns into this twisted “black comedy,” but the humor doesn’t stop you from grabbing your crotch groaning instead of grabbing your belly laughing every time a new bite is taken.

If you can handle the emasculating visuals, you may be able to get a little enjoyment out of the numerous man-butt shots. The bright side is, I feel incredibly safe watching Teeth as a gay man. But show this flick to impressionable young straight kids and you will fuck them up for LIFE.

There’s only one way to make a perfect trilogy out of this situation and mess with every man’s head. We need a movie about a wiener-eating butthole….

I am the author of the horror anthologies CLOSET MONSTERS: ZOMBIED OUT AND TALES OF GOTHROTICA and HORNY DEVILS, and the horror novels COMBUSTION and NO PLACE FOR LITTLE ONES. I am also the founder of BOYS, BEARS & SCARES, a facebook page for gay male horror fans! Check it out and like it at www.facebook.com/BoysBearsandScares.
View all posts by Daniel →
This entry was posted in Johnny You ARE Queer - Gay Thoughts, Movie Times & Television Schedules - Staying Entertained, Scared Silly - Horror Comedy, The Evil of the Thriller - Everything Horror and tagged gay horror, horror comedy, Killer Condom, Teeth. Bookmark the permalink.