Forget the joystick, I’m busy playing with my Wii Wii

Hey, the straight boys might have Lara Croft to drool over, but we gay guys get some hot artificial excitement every now and then. I’m playing Dead Rising: Chop Till You Drop on Wii, and the main character, Frank West, is a hot piece of pixilation. To add to the enjoyment, I downloaded a game save from the internet with the new costumes already unlocked. So the first thing I did as Frank was to avoid the zombies and run around until I found the wrestling briefs! Since the game has an over the shoulder viewpoint, I get to watch Frank’s buns the entire game, the word “Capcom” stretched across his butt cheeks. Believe me, I’ve tried to get the character to turn around so I can see how the front package stacks up, but the game forbids it (did some anti-gay friends of Miss California develop this game or something?). As a result, I’m also missing out on Frank’s very hairy chest, which I can only enjoy in cut scenes. Unfortunately, during cut scenes, he’s in his original costume, not the briefs, so I just get to see the tufts of hair popping over the open top buttons of his shirt… 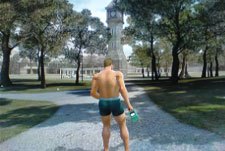 Don’t know how I feel about the Wii novelty controllers. It’s tough getting used to this whole Wiimote/Nunchuk combo. When I first started playing Dead Rising: Chop Till You Drop, I was finding that I could NOT get my gun site to aim at the zombies…and then suddenly realized after two days that it was because I was trying desperately to line up my sites using the thumb stick on the Nunchuk, while the hand holding the Wiimote was laying lazily in my lap! I’m not all that into having to point and aim the Wiimote at the screen all the time while controlling my characters movement with the Nunchuk. It’s like playing a light gun game and a standard 3rd person shooter at the same time. And unfortunately, this particular game doesn’t have an option to use the old Gamecube controller like some games do. I miss the simple days of a black shaft you pulled on while pushing a little orange rosebud repeatedly for some action. I’m referring to the Atari 2600 joystick, of course.