A Silent Hill movie you watch just to say “That’s from the video games!”

While the original Silent Hill movie crammed together the premises of the 1st and 2nd video games, Silent Hill Revelation is predominantly based on the Silent Hill 3 video game. It does an awesome job of bringing the protagonist Heather to life, forcing the homage to her vest down our throats and bringing in the amusement park and that damn pink bunny. 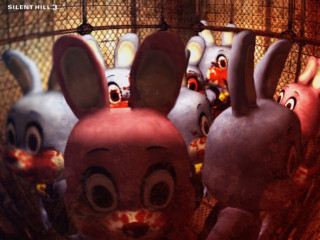 The great thing about Silent Hill Revelation is that it does what the video game failed to do; it exploits that pink bunny. No, no pink bunny sex. But in the video game, every time I passed that damn pink bunny in the amusement park, I was sure it was going to move, but it never happened. They even had a chance to have some fun with the pink bunny through a glory hole in “the room” in Silent Hill 4, but once again, he was a dead fuck, just sitting completely still on the bed. So I was happy to finally get a little rise out of him in the movie.

The other thing I like about the movie is that it explains little Sharon’s return to the normal plane of existence and name change to Heather, and even features cameos by the mother and “young Sharon” from the first film. After that, they take a cue from the game Silent Hill Homecoming. In that game, the protagonist doesn’t go directly to Silent Hill, instead suffering from scary dreams or hallucinations of the town. I don’t totally remember which—but the same thing happens to Heather in this movie. She’ll be at school and all of a sudden we get the dark world effects, and the baddies actually cross over through a portal hoping to lure her back to Silent Hill. I know. Sounds like it sux already. Eventually, she gets there.

While the first movie perfectly captured the hellish atmosphere of Silent Hill, you never feel that sense of dread in Revelation. Maybe it has to do with the fact that the camerawork and style had to cater to the 3D presentation. Not sure if that helped the excitement in theaters, but without the 3D effect while viewing it at home, the experience lacks energy. And while the monsters are incredibly freaky looking at times (the fricking mannequin spider is awesome), they just don’t deliver any terror.

The movie attempts to recreate situations from the games, particularly Silent Hill 3 and Silent Hill Homecoming, but fails to bring in some of the biggest, most hideous monsters from those games, which could have helped up the horror. Yet it’s still loaded with references to the games. Pyramid Head is back, but he is not as menacing, his big ass knife looks like it’s made of rubber, and he doesn’t bring along his bugs.

Remember in the game when you had to walk down that swirling spiral staircase for like…EVER…while turning more and more zombie-esque? There’s a hat tip to that. There’s a part in the game Homecoming when you go into a round operating room and end up getting your ass mercilessly slashed by nurses (I fricking hated that part). It’s adapted for the movie. 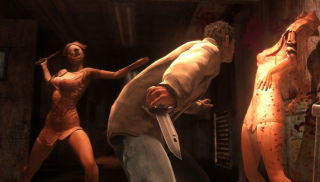 The whole movie feels like a video game—and not the terrifying experience Silent Hill video games once were. So basically, it feels like any of the crappy Silent Hill video games from the past 5 years or so. Then in the last 2 minutes, they try to make fans of the games walk away with a positive reminder of how it stayed true to the series by throwing in the truck driver from Silent Hill Origins and the prisoner transport bus from Silent Hill Downpour. Now they can make a couple of unrelated branching movies! Truck drivers and hardened criminals. Yummy!

I am the author of the horror anthologies CLOSET MONSTERS: ZOMBIED OUT AND TALES OF GOTHROTICA and HORNY DEVILS, and the horror novels COMBUSTION and NO PLACE FOR LITTLE ONES. I am also the founder of BOYS, BEARS & SCARES, a facebook page for gay male horror fans! Check it out and like it at www.facebook.com/BoysBearsandScares.
View all posts by Daniel →
This entry was posted in Movie Times & Television Schedules - Staying Entertained, The Evil of the Thriller - Everything Horror, What I'm Doing With My Joystick and tagged Silent Hill Homecoming, Silent Hill Origins, Silent Hill Revelation, survival horror, video games. Bookmark the permalink.